In addition to the Patrol, Detective, Traffic Divisions, and the ERT, the Police Department has a number of other duties to which officers are assigned.

One is the Tenafly Police Honor Guard. This unit is tasked with representing the department at a number of events throughout the year. This includes funeral details for fellow officers killed in the line of duty, memorial details, parades, and others. These officers exemplify professionalism in their appearance and synchronized drill movements. Each year, they make a trip to Washington DC to attend the National Law Enforcement Memorial Services, and they also participate in services around our County including the Bergen County Police Academy Memorial Day Services and many Police Pipe and Drum events.

Our Honor Guard has been honored to present the flag at Giant’s Stadium for a Giant’s game and at Continental Arena for the New Jersey Nets! We were proud to see our officers represent the Tenafly Police Department so professionally on national television! 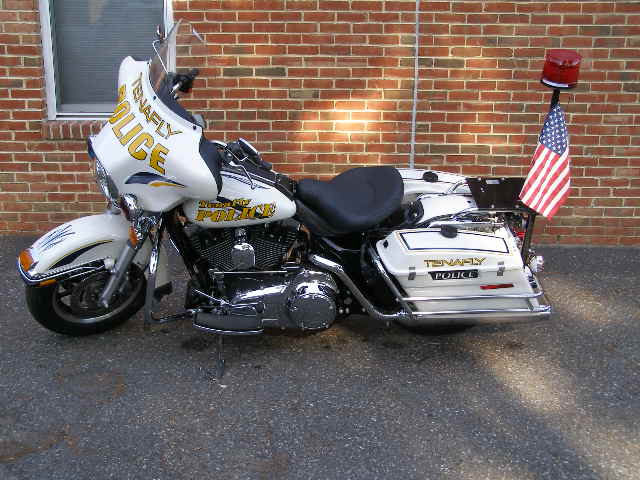 We also have a Motorcycle Unit, which includes a Harley Davidson motorcycle outfitted with emergency lights, sirens, a police radio, and a radar unit to monitor speed. The officers go through a grueling two-week training program that teaches all aspects of using a police motorcycle. Far more intense than a simple motorcycle license course, this class puts the officer through difficult training that includes using the bike tactically, dismounting and mounting under various conditions, and even includes some shooting techniques. The police motorcycle is a favorite with children and makes the officer more approachable to the general public. The Harley Davidson motorcycle was donated by Joseph M. Sanzari.

Our Department also has a D.A.R.E. unit, which is comprised of several certified instructors who teach the program in the Tenafly Middle School and Our Lady of Mt. Carmel School. D.A.R.E stands for Drug Abuse Resistance Education, and the program has been working in Tenafly for almost 10 years. Each year, over 1,000 students receive D.A.R.E training from our officers, and the program continues to grow in popularity with our youth. They get to know our police officers on a one-to-one basis, which improves the relationship between young people and our officers.

Based on their expertise in particular areas, several are assigned to on-call units that respond all over Bergen County to assist other jurisdictions. One officer is assigned to the B.C. Prosecutors Fatal Accident Unit, and response throughout the county to conduct accident investigations involving fatalities or potential fatalities. Another is a Drug Recognition Expert, or DRE, who responds to conduct field tests of persons suspected of being under the influence of narcotics. Tenafly Officers participate in the countywide MARS Program and the BC Prosecutor’s Computer Crimes Task Force.

We have officers assigned to the Bergen County Rapid Deployment Force (RDF), which is a multi-jurisdictional pool of officers that can respond to riots and other incidents requiring a large number of officers to handle anywhere in the County. One of our officers participates in the UASI Task Force, a statewide version of the RDF. RDF and UASI officers are trained in skills such as crowd control, riot response, and the use of chemical munitions, and will respond anywhere in the County or state where they may be needed. Our officers also instruct at the police academy and in other jurisdictions in areas including firearms and tactics, and more.